A home does not have to conform to a certain floor plan or design. If the basics of a wall, a roof and utilities are met, any kind of space can be converted into a home. The more enthusiastic among us are keen to take the road less traveled and build homes that are far from the conventional. These are some of their crazy cool houses.

It is one thing to be a Star Trek Fan, and quite another to transform your home into The Starship Enterprise. For Anthony Alleyne, it was the fulfillment of a fantasy he long held. An interior designer by profession, he spent thousands of pounds converting his home into something resembling the Enterprise. The result is quite dramatic, with the house having everything from giant screens to LED lighting and sound effects. 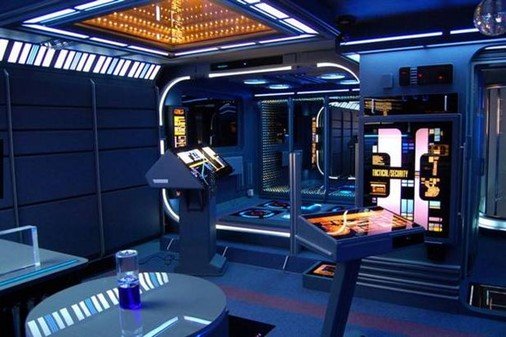 He did have to make a few compromises, such as obstructing the windows and removing the cooker, so the home is not altogether practical and is hard to sell as a result. But for the sheer work done on it, the home has a coolness factor that fans of the sci-fi would appreciate.

The Brooklyn’s Clock Tower home is exceptional for its build. Counted as one of the crazy cool houses it is also known for its picturesque views of New York, and for its abundant floor space that stands at roughly 7,000 square feet. 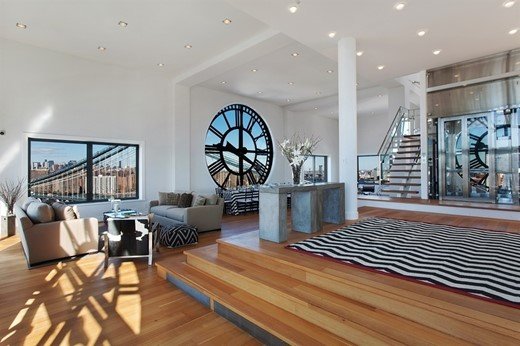 It is among the crazy cool houses you can find in The Big Apple, with this one flaunting a market price of at least $15 million. This is prime real estate, and the high ceilings and iconic clock face window justify the high price.

The Mushroom House in New York 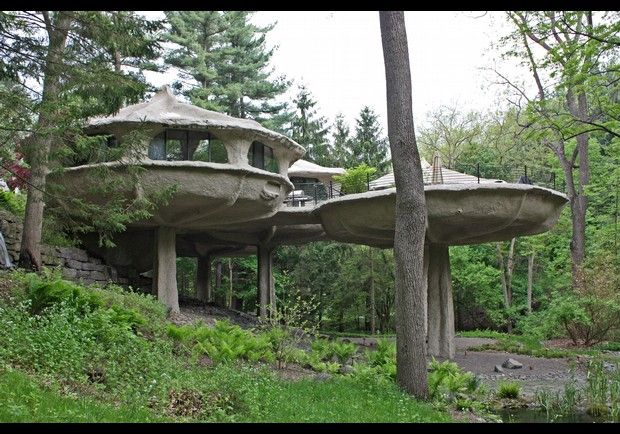 This whimsical house was built back in the 1970s and it features a facade that is reminiscent of mushrooms. In keeping with the design language, it has mosaic tiling, a veiny mosaic roof, and rounded walls. It is also aptly lifted from the ground but has enough structural integrity in the single column that it is mostly supported from.

If you love boats, and houses, this floating home will greatly appeal to you. Waterfront properties are considered very valuable, and Seattle seems to have a high affinity for these kinds of homes. The comforts of floating homes are immeasurable. 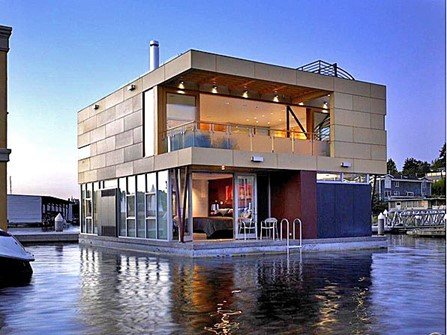 For people who are drawn to water and the activities it makes possible, this floating house is perfect. You get a rooftop terrace as well as three bedrooms but for an eye watering price tag of over $3.5 million.

This epic house dots the Alaskan wilderness and is inherently cool because of its atypical design. At 56 meters tall, the house appears stackered with staircases that look like they were an afterthought. The Goose Creek Tower as it is formally called, was built after a forest fire cleared a space among the trees. 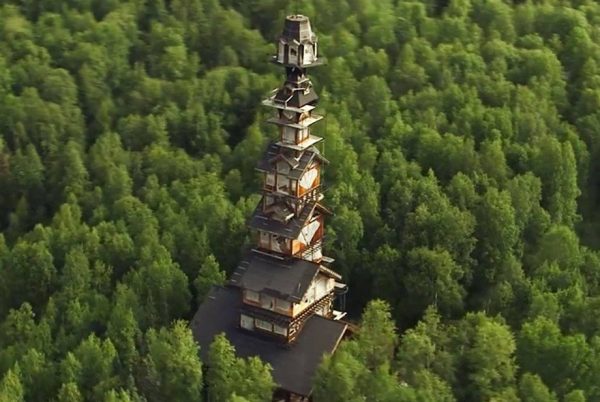 The owner built a normal house, but after the trees started growing back, continued to add floors, one after the other until they peaked well above the tree canopy.

Now the higher floors offer uninterrupted views of the nature around it, something that only the owner can enjoy as no visitors are allowed.

The Skateboard house In California

Skateboarding is a sport that is finally getting Olympic recognition. For passionate skateboarders, their skills are only limited by the access they have to their rinks. 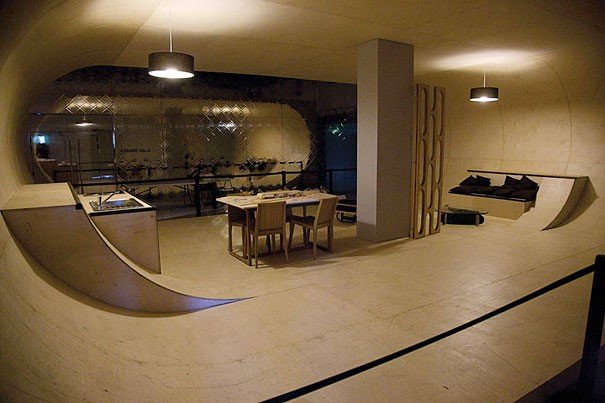 With this kind of a cool and creative house, there would be no such limitations as they would be able to practice whenever they felt like it. The rink is available everywhere, including the kitchen and bathroom. The Skateboard House was masterminded by Pierre Andre Senizergues, who has accomplished much in the sport.

The Spaceship House in Albuquerque

Bart Prince’s home in New Mexico looks otherworldly from first sight. Perched above the natural flora of the area. He worked on it for over ten years, completing it in 1984. It features an open deck on the front and has a tiled façade. 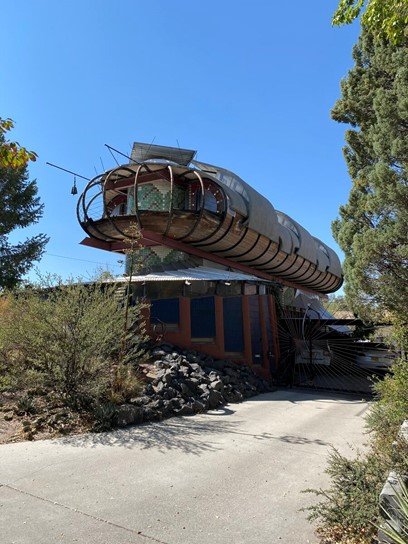 There is also a noteworthy stegosaurus sculpture at street level among other sculptures made of metal. It is quite architecturally rich and is just crazy enough to appeal to any fans of sci-fi and searchers of crazy cool houses and weird houses.

This house is so magnificent and so aligned with the nature around it that it has become an American treasure. Fallingwater was the work of Frank Lloyd who is widely regarded as the greatest architect to ever live. 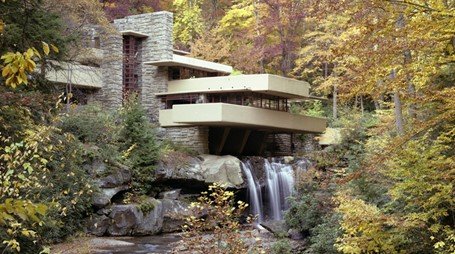 It ranks high among crazy cool houses and receives visitors all the year round. Fallingwater is very iconic and can be counted easily as one of the most beautiful houses in the world.

These cave like rock houses in Central Anatolia are among the popular attractions in the area. These crazy cool houses are formed from soft rock which was a result of volcanic eruptions from ages past. 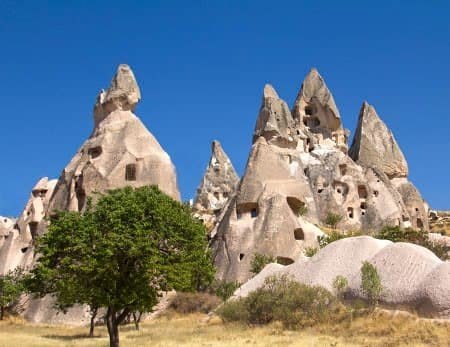 The unusual formations that have all kinds of shapes from cones to mushrooms. Because of the softness of the rock, there are catacombs drilled underground that can be explored. The houses are open to visitors who are curious to explore the houses.

Solar Dome House in the Arctic

The geodesic home design is renowned for many reasons, but one couple exceeded all of them with this creation in the arctic. The solar home by the Hjertefolgers has three levels, as well as a garden for growing food. Not only is the house able to withstand the harsh arctic climate, but it also thrives by being fully solar powered. 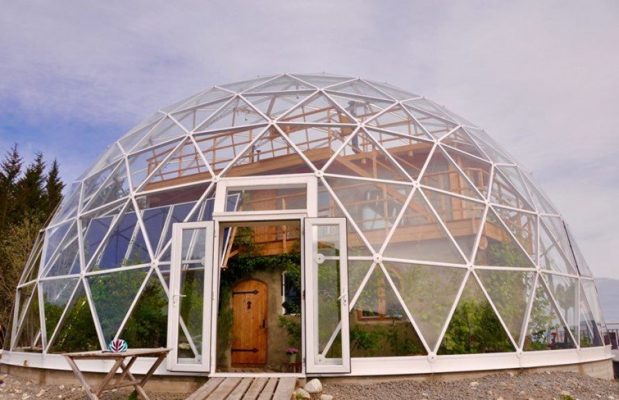 Built out of environmentally friendly materials, the frame alone is good enough to last for one hundred years and needing very little maintenance. Best of all is the views it affords its occupants, including those of Northern Lights. 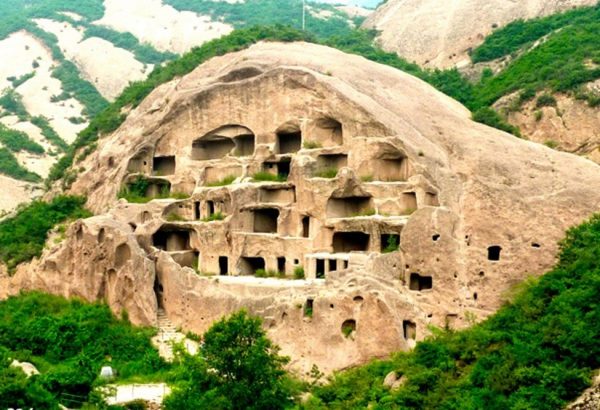 Living on a mountain side is incredibly cool as it gives you the best views of the surrounding valleys. This expansive commune in Guyaju was built during the Tang Dynasty. The caves are the largest in China and are accessed through stone steps ladders.

The highest level of the cave features a sort of ancient penthouse where the leader was believed to reside. It attracts attention of visitors who are interested in exploring crazy cool houses of the world.

With five bedrooms, five bathrooms, an enormous kitchen, and a master suite on the top floor of the five-story home, this Sculptured house is the craziest thing out of Colorado. It is magnificent and affords some of the lushest views of the vast Colorado mountains. 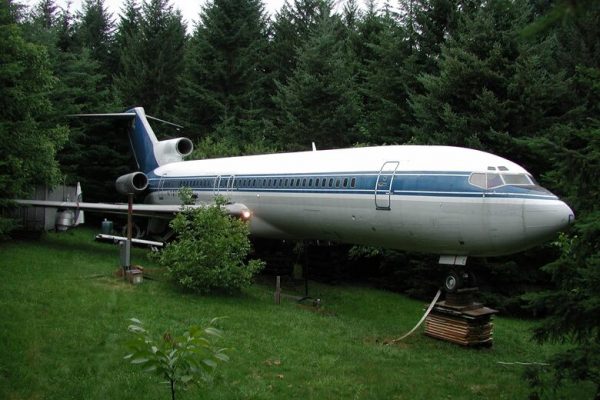 An obsession with airplanes is what inspired this homeowner to invest in this wild project. Buying a decommissioned military aircraft for $100k and spending a little over $200k converting it into a home, Bruce Campbell is now comfortably living his dream. The airplane house is tucked away in the woods within a property that spans 10 acres in Hillsboro, Oregon.

The fuselage has enough room and is equipped with enough amenities to make it fully livable. The interior has not undergone too much of a change, with Bruce preferring to preserve fixtures that were originally present. He accesses the home through a retractable staircase. He welcomes any guests who wish to visit his crazy cool home.

At first sight this home looks unremarkable from the outside, but it is anything but. This gorgeous Hempstead home is mostly underground. 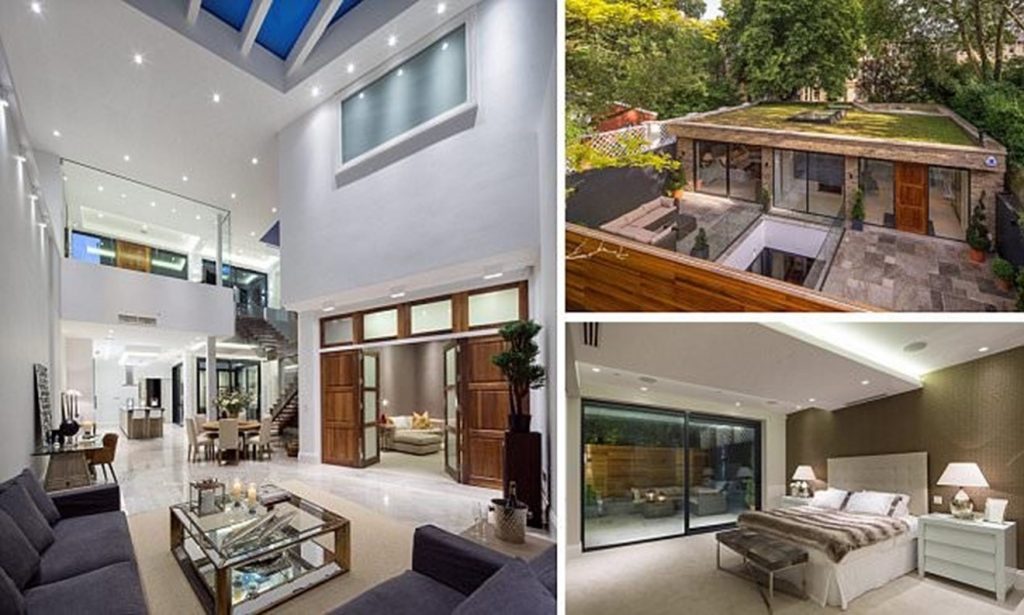 Restrictions at the site forbade the house to be built any higher than the structures it was replacing (a garage). The architects therefore decided to instead dig into the earth to maximize on space. The result is a lush mansion with high ceilings and luxury features that would be appreciated by anyone. At its valuation of £4.5 million, the subterranean house is far from cheap.

There is no shortage of crazy cool houses across the world. They are not only a demonstration of what is possible when architectural creativity is given free roam, but also how a search for fulfillment leads to some otherworldly creations. Would you build or even consider building such weird establishments? If you had no restrictions when it comes to finances, you absolutely should.