We are witnessing more and more use of green architecture all across the world. Not only are buildings being redesigned to be more eco-friendly, new large scale projects are also being undertaken with self-sufficiency in mind. At the heart of this forward-thinking construction are famous green architects.

These green architects walk the road less traveled by putting the environment first in all their creations. Because of this integration of nature, the results are usually spectacular, with a warmth and peacefulness that is often rare to find with concrete and metal. Here are 12 of the most famous green architects of our times who are behind some amazing green and sustainable designs.

Frank Lloyd Wright is One of the Most Famous Green Architects

Considered by many to be the greatest architect who ever lived, Frank Lloyd Wright is considered to be the pioneer of green design. While this is debatable because the principles of sustainable architecture existed during the roman times, his pivotal role in furthering them is undisputed.

He passionately advocated for designing in harmony with the environment. He called this organic architecture, and this philosophy was exemplified by the Fallingwater, completed in 1935. The home in Laurel Highlands in Pennyslavania is one of the best ever built, and is currently considered a National Historic Landmark. 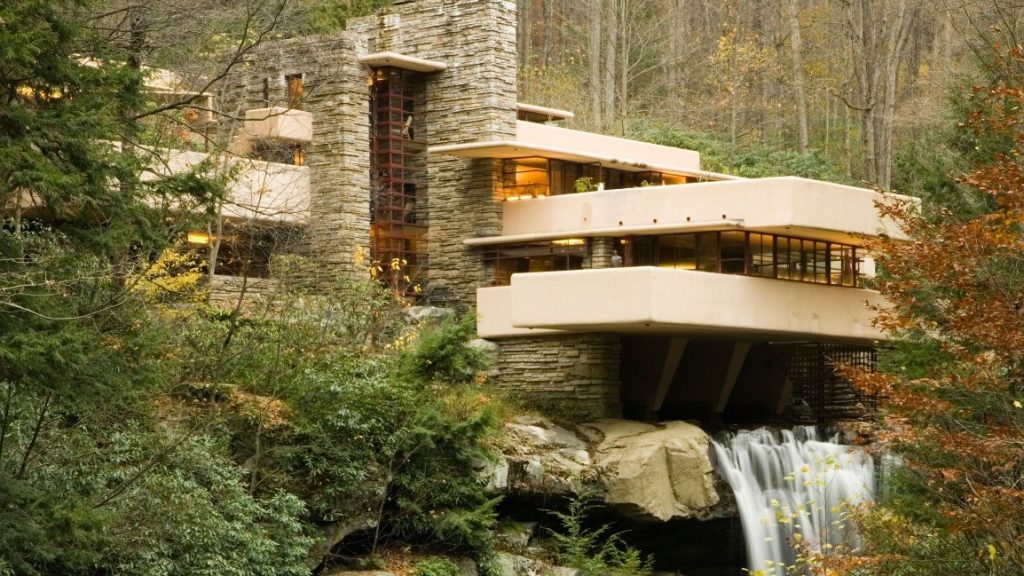 He is Canada’s most beloved green architect and one of the famous green architects of our time. He heads a large international architecture firm in San Francisco. Long before he was a leading man, he was involved in many sustainable projects, such as Dockside Green in British Columbia. This large development was completed in 2011 and is renowned for its green initiatives including biomass gasification, car sharing program, and water treatment system.

Busby continues to be an advocate for such construction, asserting that green design and good design are inseparable. He co-founded the Canada Green Building Council which furthers this advocacy.

The reputation of the British architect precedes him. The firm he founded, Foster + Partners is the largest in Britain and has a large international presence. It has won many awards, which is an attestation to the architectural genius Foster is. Foster, of the famous green architects, is an avid fan of technology, being one of the pioneers of high-tech architecture. 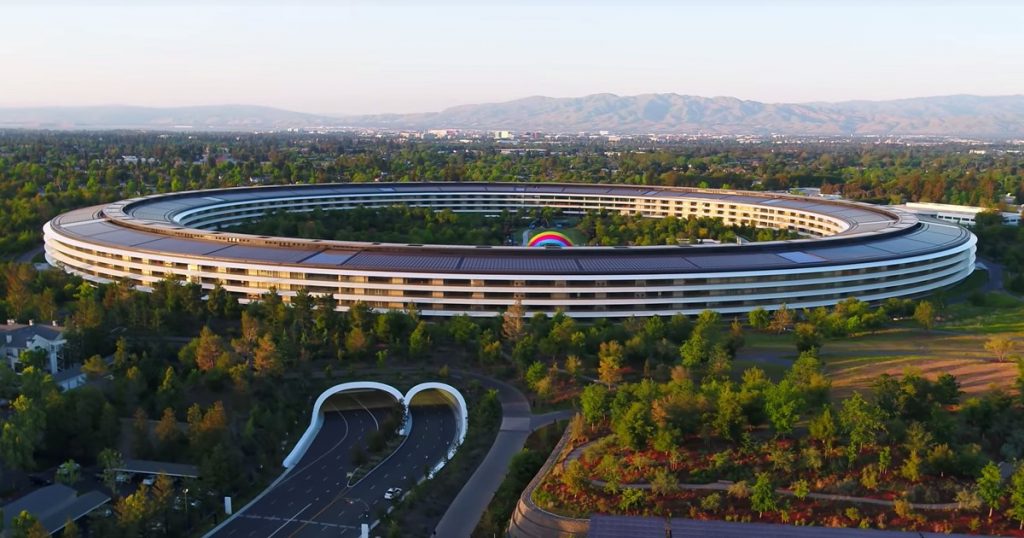 His love for this modernist style is only matched by his appreciation of sustainable construction. One of his most easily recognizable projects is the Apple Park whose green spaces occupy an astounding eighty percent of the land. It is powered by renewable energy in its entirety and uses natural ventilation for nine months of the year.

A lifelong fan of Frank Lloyd Wright and organic architecture, Eric Corey Freed worked with an apprentice of the famed architect before moving to San Francisco. It was here that he really developed his passion for sustainable design, going on to found his firm, organicARCHITECT. He has written a few books on the subject, and continues to speak passionately about it in the Bay Area.

Fondly referred to as Bucky in his professional circles, R Buckminster is famed for his popularization of the geodesic dome design. He is rightly considered as one of the most famous green architects for his sustainable designs. A humanitarian at heart, he wanted to counter the two problems he felt burdened most of the world- homelessness and hunger. 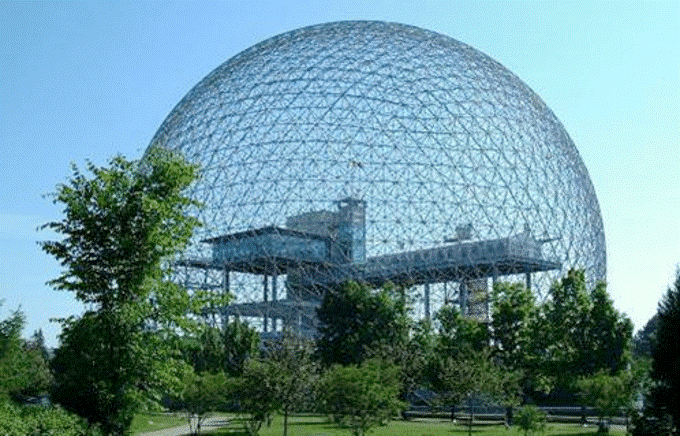 He developed the geodesic dome home which could be cooled and heated naturally, and would require fewer materials for construction. The home would be widely adopted by the US Army because of its efficiency. He even lived in one himself. One of his most popular large scale projects was the Montreal Biosphere

The Presidential Award for Sustainable Development is just one among the many honors given to William McDonough, one of the famous green architects of our time. His influence is far reaching and the Adam Joseph Lewis Center is one of his credited creations. It is so advanced and sustainable that it produces 30 percent more than it needs and shares it with its community. 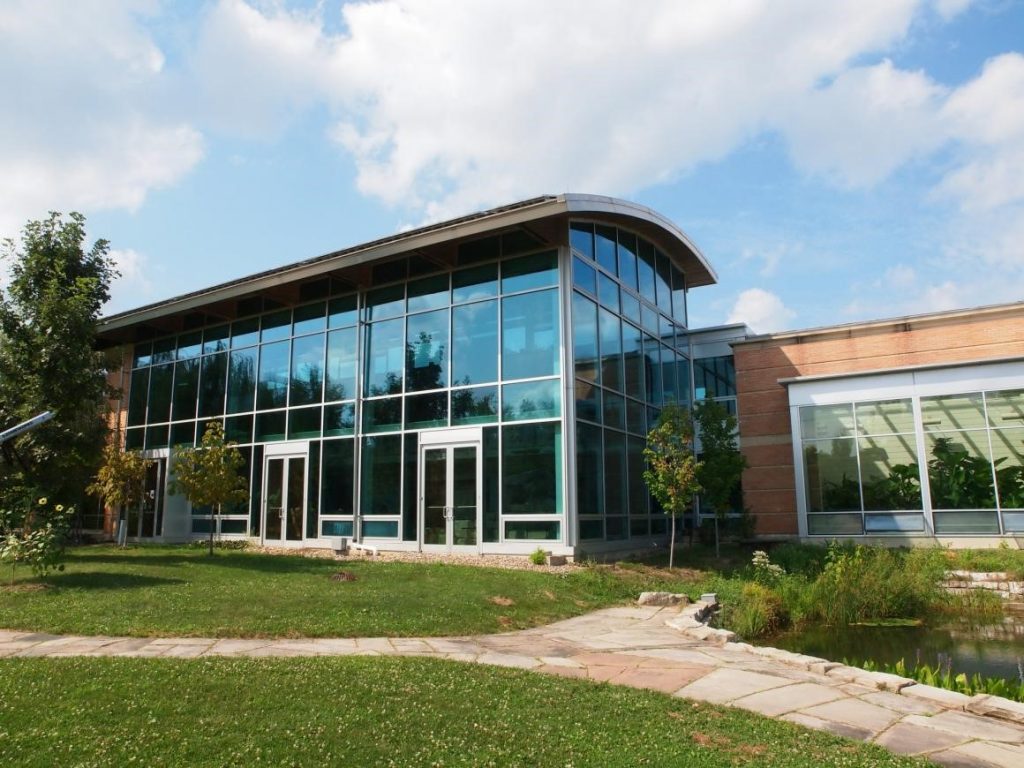 The famed Australian architect started his career in modernist design. It was later on that he started leaning towards green building when he learnt to appreciate the traditional style of building in his native land. He started working on modest projects out of his home, but after winning the Pritzker Prize, he gained more international recognition as one of the famous green architects. The Arthur and Boyd Education Centre in New South Wales is one of his crowning achievements. 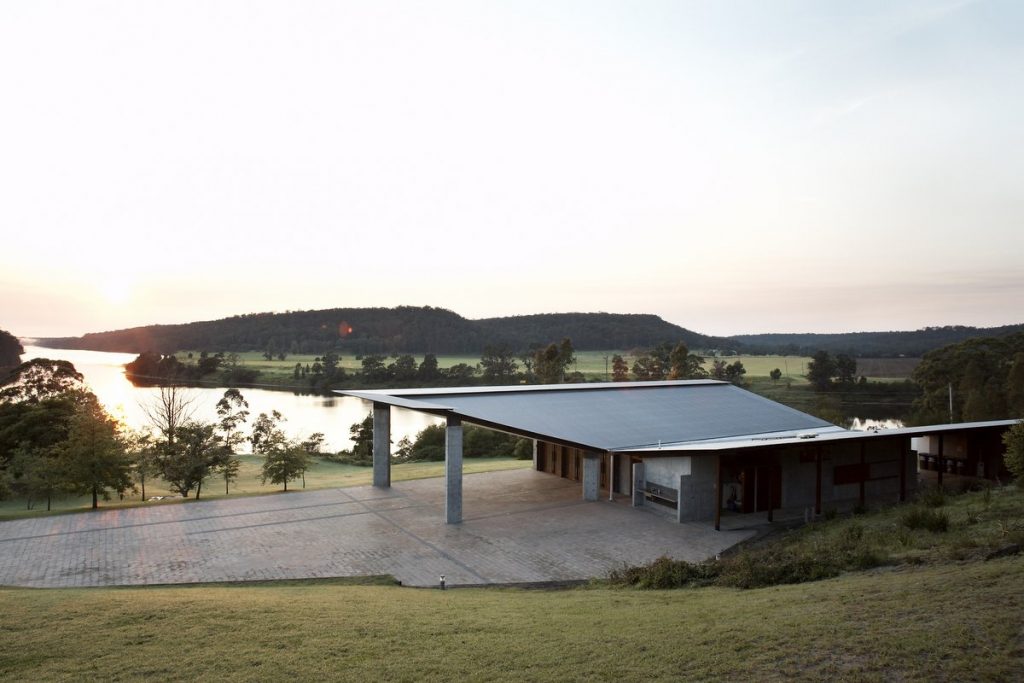 Easily one of the most influential and famous green architects of our time, Renzo Piano is renowned for his imaginative approach to design. He appreciates technology and allows it to influence his work. The California Academy of Sciences is one of his most sustainable projects, with its signature roof blending seamlessly with the park. 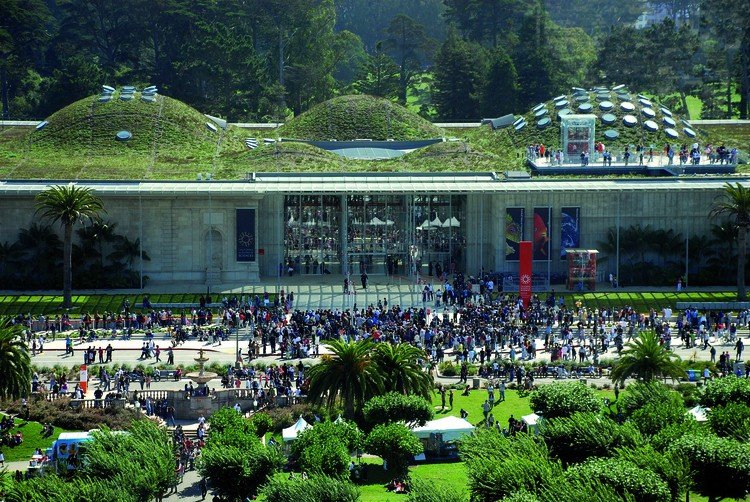 This world-renowned architect from Malaysia is the pioneer of ecology-based architecture. He has built a career out of sustainable design, and is the creator of the bioclimatic skyscraper. It is a tall building concept that incorporates the areas geology, climate, and meteorological history to create a building that is energy efficient and interactive with the environment. He believes in ‘eco-mimicry’ where the design imitates nature as much as possible. 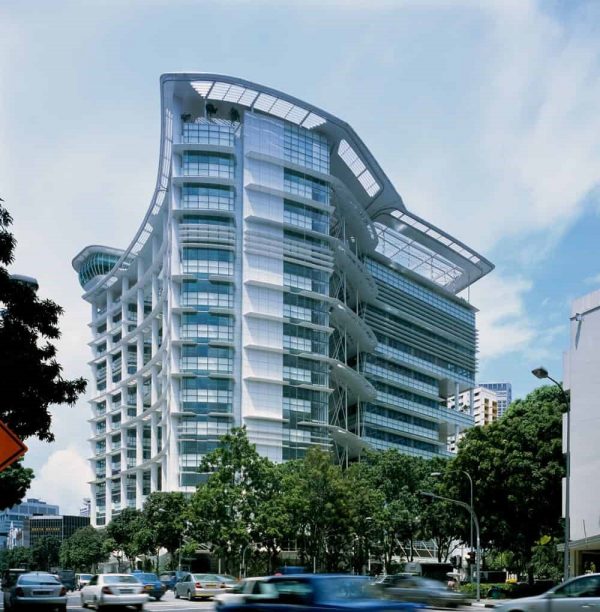 The National Library in Singapore is a fine example of green design by Ken Yeang. It is not only a library but also a creative space that is naturally illuminated and heated, and naturally inviting with its 14 gardens full of tropical plants. It uses technology to enhance sustainability, such as with motion sensors in the escalators and taps to only work when needed, and light sensors to cut off artificial lighting when sunlight is sufficient.

A highly impactful sustainable architect, Jean Nouvel is a Pritzker and Aga Khan Award for Architecture winner. He is considered as one of the best green architects today. His portfolio is long, and has some popular buildings to his name. He campaigns for green design, knowing it is necessary for future sustainability. Some of his futuristic and eco-friendly creations include the One Central Park in Sydney which has been recognized by the Green Building Council of Australia as the tallest of its kind. 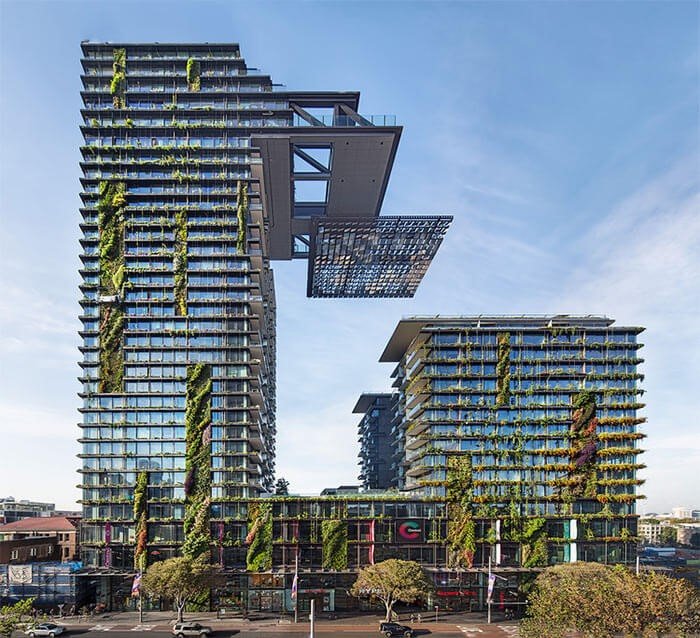 A vocal believer in sustainable architecture, Amanda sturgeon is a recipient of the Women in Sustainability Leadership Award. Biophilic design which encourages maximum connectivity with the natural world is something she passionately encourages. A building that imitates nature or acts as nature would, she asserts, is the perfect one.

Rolf Disch is a pioneer for solar energy and an activist. He is one of the famous green architects with an affinity for renewable, sustainable energy, particularly that from the sun. His most popular work is the Heliotrope in Germany, which was the first home of its kind to produce surplus energy. 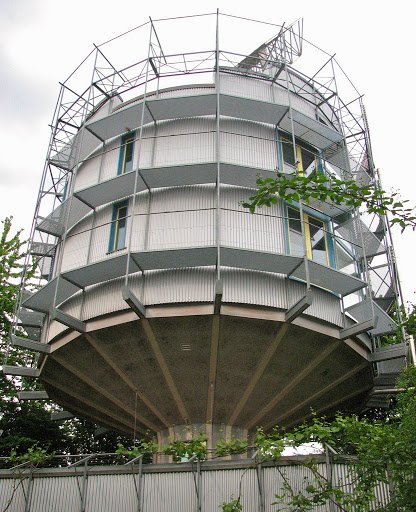 He has gone on to develop this into a concept called PlusEnergy, where a building purposefully produces more energy than it consumes. His Solar Settlement and Sun Ship projects exemplify what is possible with solar power.

These are only a few of the famous green architects. There are others with similarly commendable portfolios, such as Lance Hosey who worked with William McDonough for over a decade and is a LEED Fellow. There is also the duo Wong Mun Summ and Richard Hassel who are making big strides in sustainable building in Southeast Asia, China, and Australia.

Suffice it to say with a bludgeoning global population, green architecture might be the only reasonable way to approach the forthcoming demand. And these architects have already shown us the way.

Green Architecture and Conservation of the Environment

Environmental conservation is largely being advocated for presently given how disruptive human activity has been. Achieving carbon neutrality is a large endeavor, and every little step counts. Green architecture offers one of the more sustainable ways of providing housing while being mindful of the environment.

In recent years, green design has gained traction as more and more architects become more conscious of the world around them. By adopting a more eco-friendly approach to design, they are able to deliver projects that co-exist well with nature. Green design consists of three core components- reducing, reusing, and recycling. This is why it focuses so much on using recycled materials, conserving energy, harvesting water, and renewable power.

In urban areas where existing structures make it hard to integrate green design, outdoor spaces can be repurposed into gardens and parks. Increasing greenery has been demonstrated to have a positive mental effect on people in addition to improving air quality. Not only greenery but colors also play a major role in improving mood.