Tensile strength, durability, high tolerances, easy installation, ductility, and cost effectiveness are some of the characteristics that make steel ideal for construction. It binds so well with concrete and shares with it the coefficient of thermal expansion and that means it can be applied to large construction projects. Since the turn of the 20th century many famous steel buildings have come up across the globe.

We are likely to see more in the near future thanks to improving construction technologies, flourishing economies, and increased demand for high-rise commercial and residential buildings. They will likely draw their inspiration from these architectural marvels.

The Burj Khalifa in Dubai 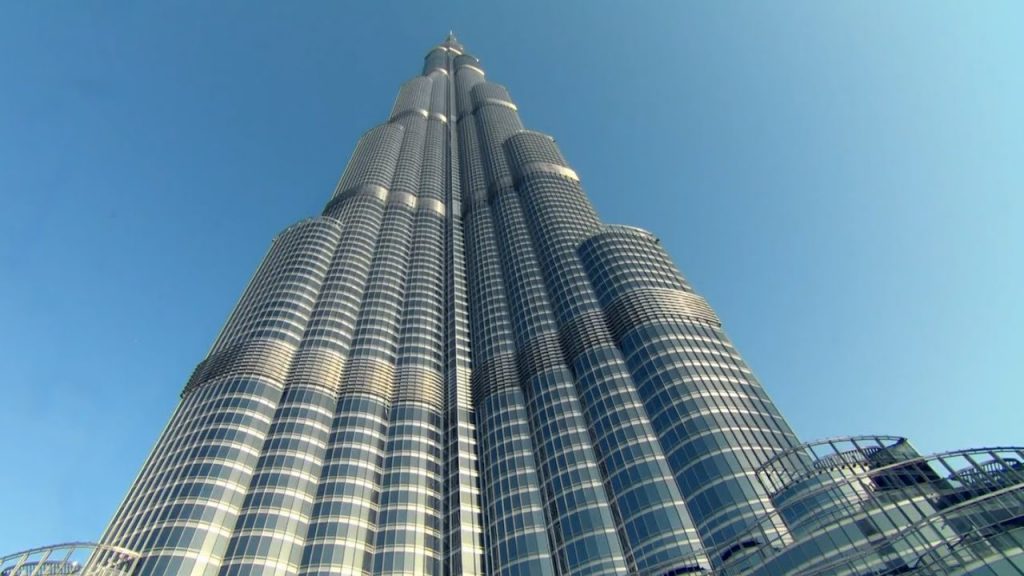 Arguably one of the most familiar buildings made of steel in the world, the Burj Khalifa is among the best resounding testaments to the possibilities of steel construction. At 829.8m tall, it took five years to complete. And from 2010 it has reigned as the tallest architectural feat of the modern era. It is built from reinforced concrete with the façade being made from aluminum and glass. Its unique bundled design means the steel is not overworked to support its height and bulk. 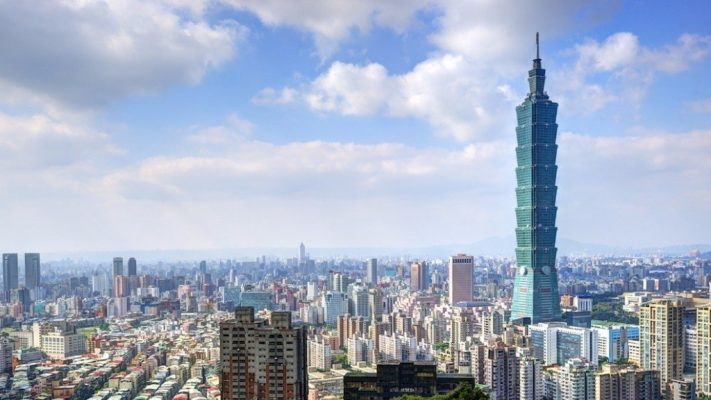 Formerly known as the Taipei World Financial Centre, Taipei 101 is a supertall skyscraper located in Taiwan.  Its claim to fame is its reign as the world’s tallest building from 2004 before it was surpassed by the Burj Khalifa.

It features heavy use of high performance steel due to its height and the area’s geology which is prone to earthquakes. This combined with its exceedingly solid foundation makes it one of the most stable buildings in the world. Its façade is made of glass and aluminum. The glass is blue green and is double panned and glazed. The tower is highly symbolic with its architectural design evoking aesthetics of Asian culture.

The Willis Tower in Chicago is another among the buildings made of steel to have laid claims as the tallest in the world. This one held the title for 25 years. It is still the tallest one among those famous steel buildings that use all steel construction, as others use concrete or composite. It has the highest observation deck in the United States, making it a popular tourist destination, and the most iconic landmark in the city. Its design which incorporates steel-unit tubes allows for the addition of more stories above the 108 already in place. 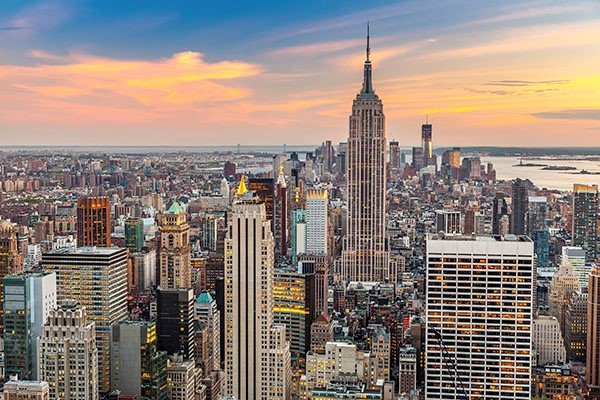 Possibly the most readily recognizable among famous steel buildings, the Empire State Building in New York City is a testament to the structural possibilities steel helps create. It had the most floors of any skyscraper after it was completed and has grown to become an American Icon. It was ahead of its time when it was opened and is among the most popular tourist attractions in the U.S. both domestically and internationally. So symbolic is the building that its height is now regularly used a standard of reference across the world. 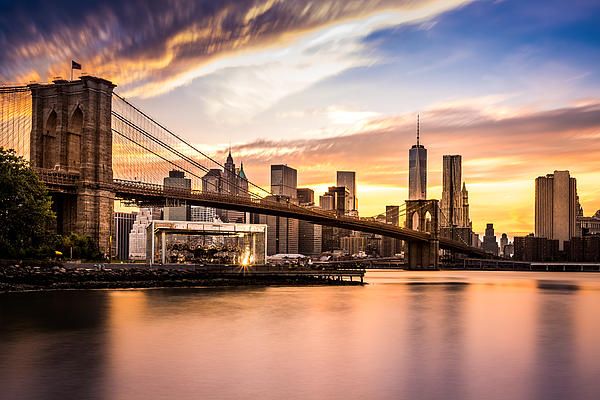 Though the Brooklyn Bridge is a steel structure and not building, it earns a place in this list because of its popularity and its age. At the time of its construction, it was considered a marvel of technology, and embodied the optimism of the future yet to be seen. It is now a symbolic landmark of New York, and is a testament to the longevity of steel. Connecting the boroughs of Brooklyn and Manhattan over the East River, the bridge continues to be maintained to ensure that it is around for many more centuries. 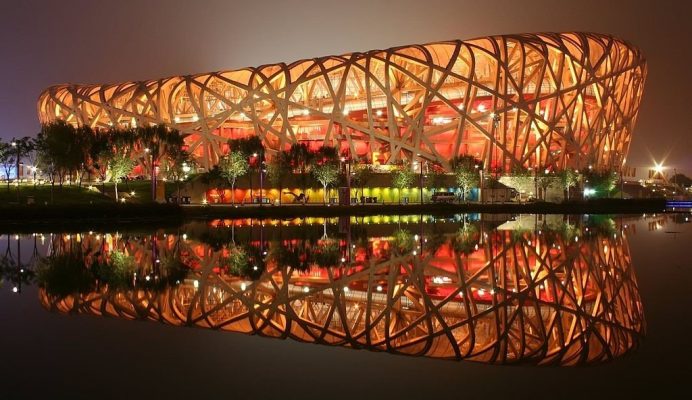 The Beijing national Stadium or the Bird’s Nest is a 91,000 seater stadium that was built for the 2008 Summer Olympics and Paralympics. Not only does the stadium have a very abstract design, its exterior is constructed entirely of curved steel. A large concrete base was first constructed and the curved steel frame was installed later in phases.

The frame itself is made from interconnected sections which were welded together. In total, over 42,000 tons of steel were used. The stadium has since been used for sporting and non-sporting events and is scheduled for the 2022 Winter Olympics and Paralympics. It’s simple and yet sophisticated construction insures its use for many more events over the decades to come. 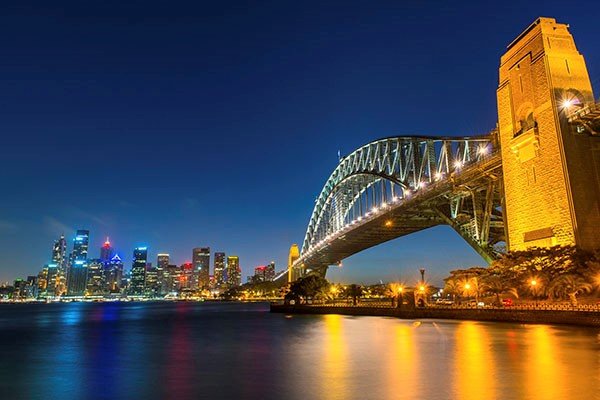 The Sydney Harbour Bridge is the second steel structure that is placed among famous steel buildings because of its history. Not only does it feature the tallest arch of its kind in the world, but it is also one of the longest at 1,149m. It is in close proximity to the Sydney Opera House and together they form an iconic picture of this most populous city in Australia. The bridge connects the central business district with the North Shore, allowing trains, vehicles, bicycles and pedestrians passage.

The Chrysler Building in New York 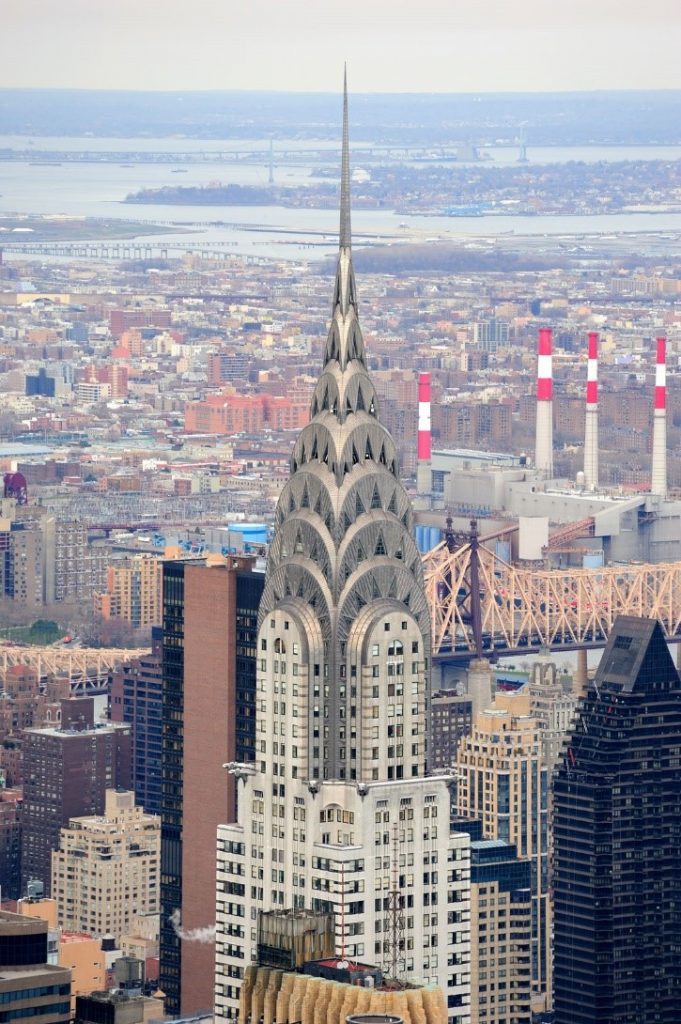 The Manhattan skyline is incomplete without the stainless steel spire of the Chrysler building. It was commissioned by Chrysler and opened in 1929. The skyscraper also features steel beams throughout its construction. The geometric decoration was at the request of the owner, and it’s a design choice that is reflected in the interior as well.

As the third New York entry, it is emblematic of the economic boom at the time, and of the universal acceptance of steel as the material of choice for large skyscrapers. The Chrysler building today remains the tallest building made out of brick and steel, an achievement it’s unlikely to give up at any point in time. 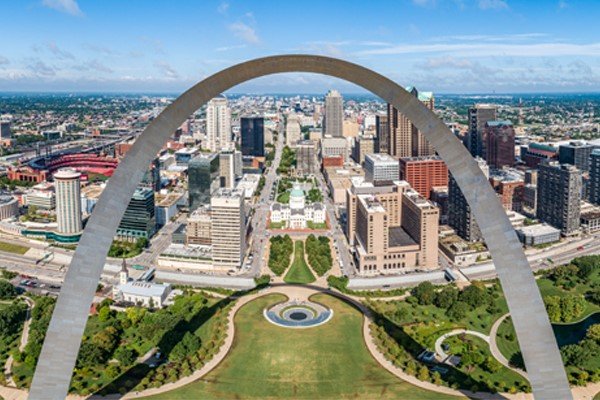 The tallest arch in the world is deserving of mention in a list of famous steel buildings. It features carbon steel on the exterior and stainless steel on the interior, with an in-filling of concrete for added weight and rigidity. At 192m tall, it is the tallest artificial monument in the West and the tallest structure in its home state of Missouri. The arch is internationally recognized as the symbol of St. Louis and was built to commemorate the expansion of the United States to the west. The arch is publicly accessible, and the arched deck offers panoramic views of the city. 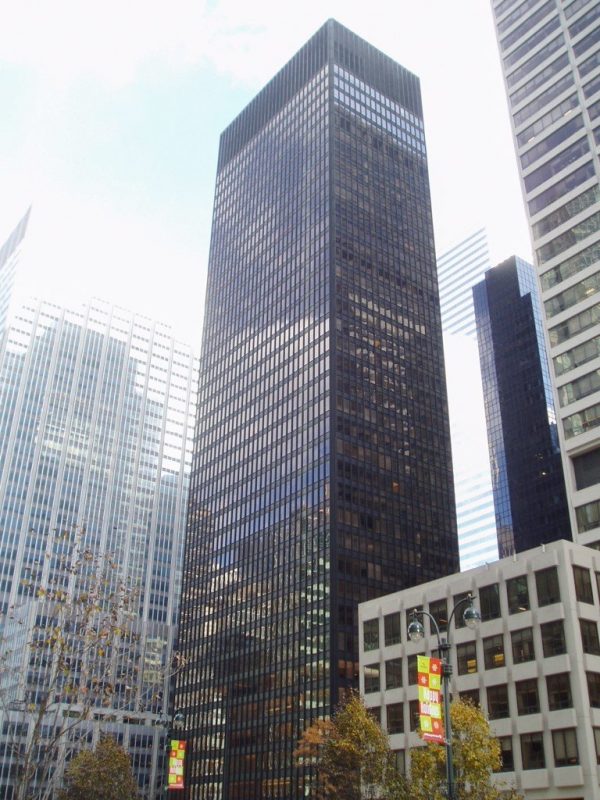 38 stories tall and overlooking Park Avenue, the Seagram building might not be as world famous but it is quite at home on this list. Completed in 1958 and hailed for its take on modern architecture, the commercial plaza was constructed on a steel frame with a glass façade. Reinforced concrete lends the building lateral stiffness. The idea was to expose the steel frame but building regulations at the time could not permit this.

As an alternative, I-beams with bronze finishes were used to reference the structure although they offer none of it. The building is very opulent and known for its use of lavish materials including generous use of marble. 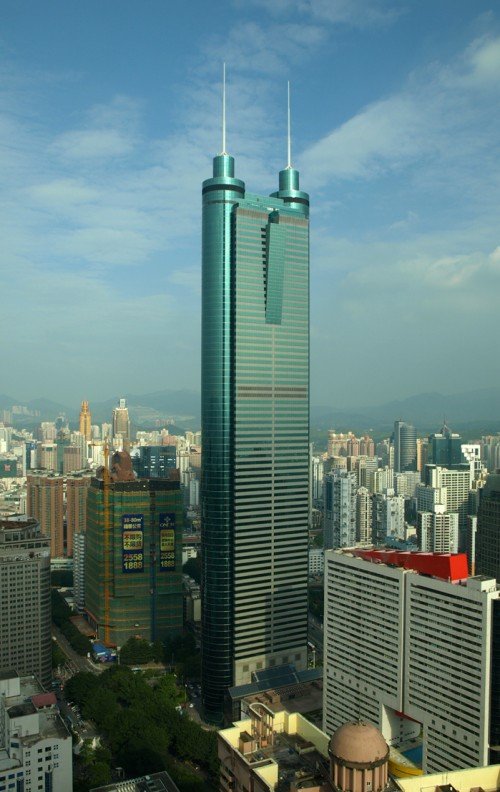 This skyscraper in Shenzhen lays claim to the tallest building in the world with less than 70 floors. It is 384 meters tall, which is unremarkable until you consider that it is the tallest building in China with all-steel construction. In total 24,500 tons of steel were used. It was built at an incredible pace, and completed in a span of 40 months which is an architectural feat in itself. It serves both residential and commercial purposes and the observation deck at the 69th floor offers spectacular views of the city and beyond.

US Steel Tower in Pittsburg 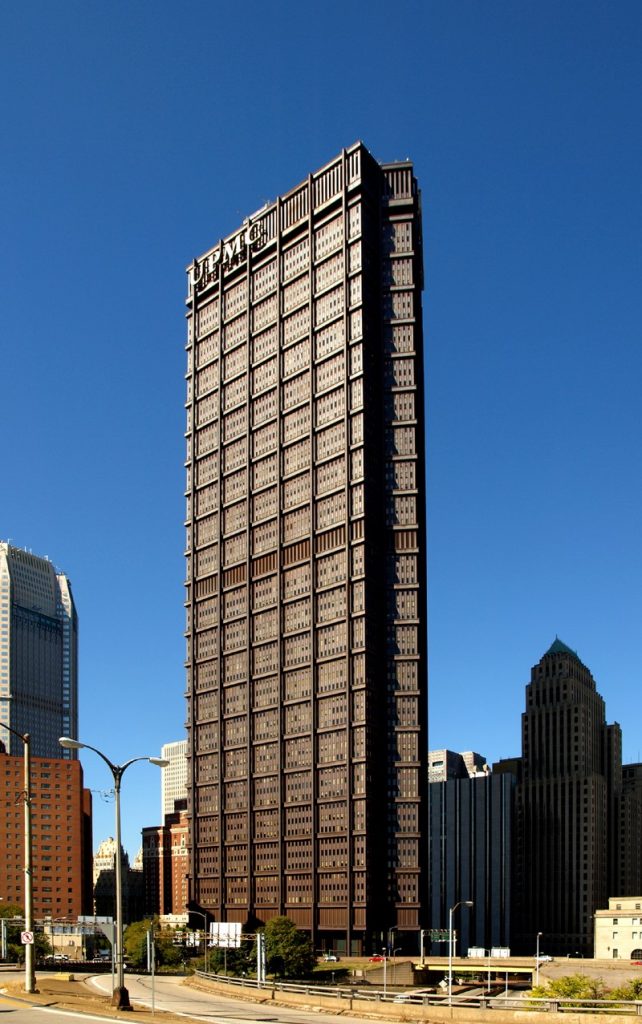 The Steel Building as it is otherwise known has a height of 256m and 64 stories. There is not much to talk about this particular building except that it’s the tallest in the city. It makes to the list of famous steel buildings because of its heavy use of structural steel (40,000 tons), some of which is on the outside of the building.

Museum of Contemporary Art in Cleveland 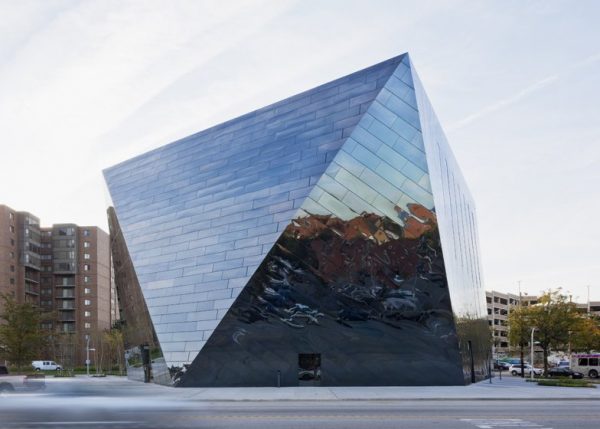 This contemporary art museum achieved its current look in 2012. The architectural design is meant to integrate with its surroundings and features a reflective façade made of black stainless steel. It has four floors in total and has blue surfaces throughout its interior.

Other notable buildings made of steel that deserve honorable mentions include:

The Eiffel tower is notably missing from the list because it is made of iron, not steel. Other famous steel buildings with steel skeletons instead of all-steel construction such as Flatiron building in New York are also purposefully exempted.

This list will likely grow in future as it has long been established steel is the material of choice for building skyscrapers. With the ambition to build a tower surpassing the 1km mark, it will be interesting to see what other mega construction projects await in the near future.